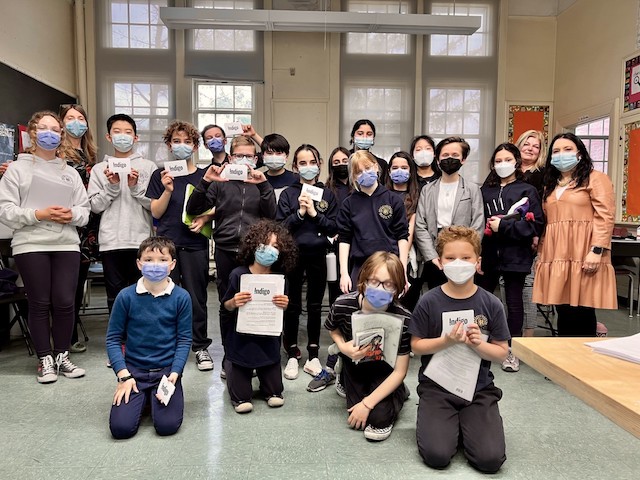 Roslyn and Willingdon Elementary students “clashed” for all the right reasons on April 26 as they participated in a virtual debate on whether or not children under 16 should be allowed to use social media.

Both schools fielded junior (Grade 5) and senior (Grade 6) teams who debated against their peers following Canadian Parliamentary structure, whereby Proposition and Opposition teams were each given six minutes to argue their case, followed by a six-minute middle segment, and three minutes for closing arguments. In addition to their respective arguments, both sides were encouraged to “clash” with the other’s point-of-view using counter-arguments.

“It was very important for us to work as a learning community and to build that knowledge as a team,” said Dr. Camelia Birlean, Consultant of the Gifted & Exceptional Learners at the English Montreal School Board (EMSB). “We all celebrated the learning of each and every student.”

The final debate was the culmination of a three-month Debating and Public Speaking Enrichment Program, first designed by Dr. Birlean in collaboration with Kiana Saint Macary, president of the McGill Debating Union. The program is aimed at strong learners who score a 90 percent average or above in need of an added challenge.

“The students are selected off of their strengths,” said Dr. Birlean. “The teachers nominate their strong learners who enjoy participating in classroom discussions and most importantly are avid readers, able to miss formal instruction once a week without any detriment to their learning.”

Students from both schools were coached by Sarah Lubbe, a teacher and Master’s student in Inclusive Education student at McGill. The selected students took part in weekly sessions at their respective schools, with students performing public speeches amongst themselves in preparation for the semi-final and final debate.

“We tried to find the most salient skills that students need in order to build persuasive arguments,” said Dr. Birlean. “You need to be able to research for valid and reliable sources, take notes effectively, organize information, be critical thinkers, listen actively and work as a team.”

The program was well-received by teachers, parents, and students alike. The positive feedback has prompted a second debate, to be held between students at Dunrae Gardens Elementary and Gardenview in June.

Dr. Birlean has big plans for the program as it enters its second year in the fall.

“As of next year, I hope to market the program even more using the real data and results we have compiled,” said Dr. Birlean. “The skills that are developed over this program are not only useful for the debating, but for everyday learning. Every student will benefit from such skills.”

With a youth and adult sector population of more than 35,000 students, the English Montreal School Board (EMSB) is the largest English public school board in Quebec. Established on July 1, 1998, when the province created new boards along linguistic lines, the EMSB network consists of 77 schools and centres. For more details, visit the EMSB website at www.emsb.qc.ca