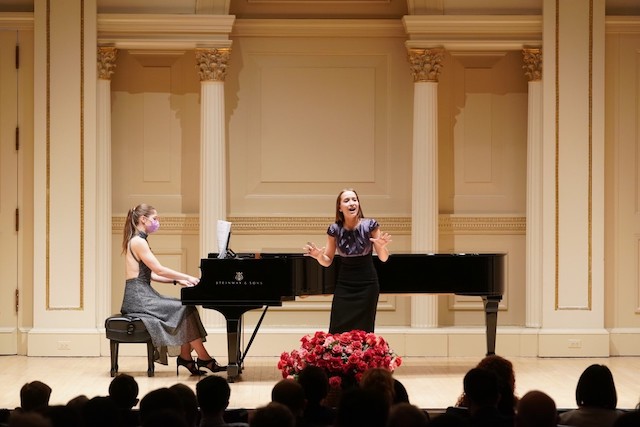 They say “good things come to those who wait.”

For 13-year-old Sienna Therrien Sternfeld, that wait amounted to about two and a half years, from the time she first learned she was selected to perform at Carnegie Hall in New York City from the moment she finally took the stage this past May.

“The performance was continually delayed because of the pandemic and restrictions,” said Sienna, a Grade 7 student at FACE School downtown. “I was thrilled, but also extremely nervous. I have so much respect for Carnegie Hall.”

Sienna sang Etta James’ “At Last” as part of American Protégé’s “We Sing Pop!” international pop music song contest. The competition brought together artists from across the globe, as they performed in front of a gala audience and a panel of judges.

Sienna says music has been part of her life from a young age. At the age of six, her mother enrolled her at the Broadway Academy, a musical theatre and music school in Montreal, where Sienna worked under the tutelage of academy founder and director Martina Oslejskova.  It was Ms. Oslejskova who encouraged Sienna to send in her video performance to the competition organizers.

“When there are opportunities to audition, she always helps me prepare for them,” said Sienna. “When we saw that particular opportunity, we figured we might as well try it and see what happens. It was going to be a good experience to learn from, even if I weren’t to get it. She taught me what it was going to be like in that environment and the experience taught me a lot about the industry.”

Sienna’s performance at Carnegie Hall marked her first time back on stage in front of a live audience since the start of the COVID-19 pandemic, a far cry from the monthly concerts she used to take part in either at the Broadway Academy or FACE.

“At the beginning, I was nervous and just wanted to get it over with,” said Sienna. “By the time I finally made it to Carnegie Hall, it was a completely different mindset. It just became pure excitement to go and sing there. From the moment we left Montreal for New York, it restarted that track of my music life and I slipped right back into the musical performances.”

Building a Musical Foundation at FACE

“The instrumental and choral program work in tandem,” said Angela Hemmingway, the vocal music specialist at FACE. “These students work at an incredibly high level and become highly skilled by the time they leave here. They feel comfortable to pursue music as a career or as a passion outside their jobs as well.”

Ms. Hemmingway, who is wrapping up her second year at FACE, says beyond the music itself, the vocal & instrumental music program at FACE teaches students empathy, language, and community.

“When we sing as a choir, we connect,” said Ms. Hemmingway. “We mix our voices with others and it actually changes us physiologically. When we sing together, our heart rates can synchronize. We can create something more beautiful and intense than anything you can create on your own as a musician. That has a trickle effect, where it connects us not only in the classroom, but it also creates a bigger community within the school. I believe the world would be a better place if everyone had to sing in choir.”

Sienna is grateful for the support, added knowledge and skillsets she has developed during her three years at FACE thus far.

“FACE has nurtured what I need to learn to be a good musician,” said Sienna. “I have learned other aspects of music beyond just singing, like instrumental, theory, how to read music and how to produce our own music. FACE, coupled with my private lessons, have built a great structure to be able to complete my musical experience.”

“Sienna has always been this bright shining light in the choir,” said Ms. Hemmingway. “As the conductor of a choir, you connect with those students who are with you and making eye contact. You can tell she has a passion for it. She is a leader not only within choir, but within the school community. She’s an exceptional student and we are very proud of her.”